When completed this page will have over 100 entries detailing the daily adventures of life operating a fish weir and overseeing important fisheries research on a remote salmon stream in southwest Alaska.

All stories are 100% real and true to every detail.

The studies, the numbers, and the stories at this nameless place will be told through daily journals written nightly inside a North Face Expedition Tent.

Characters (renamed) will be added where needed to maintain detail.  Some in the background will be omitted to maintain clarity and flow.

I consider an entry as each bold heading or bold date if your counting.  I got a lot to go and have not even counted yet.

Landing a sweet seasonal job immediately after college was my quest.  It seemed like the responsible route.  I needed to make enough money to subsist until my next job opportunity come about March.  During the off season I would hunt, fish and ski while trying to save enough cash to eventually rise out of the seasonal migrant fisheries research worker cycle.  I had a B.S. degree in Aquatic Biology from the University of Montana and a wealth of knowledge exploring the rocky mountain west, two previous summer positions in fisheries science, and summer/fall season as a fishing guide at a lodge in Iliamna, AK.  I felt I had a sweet resume for this job when I found it on the job posting board (pre internet folks) in the Ecology building of the U of M campus.

The United States Fish and Wildlife Service was looking for multiple GS-5 Biological science technicians to work at remote field camps across the Alaska Peninsula National Wildlife Refuge.  The duties included collecting fisheries and limnological data from remote field camps for extended periods.  I quietly tore it off the board and moved to the computer lab, inserted my floppy and began editing my credentials for the submission.  To cut to the point, I obviously survived the selection process and was quickly in AK  staking clam in the bunkhouse in King Salmon.  I arrived with two dry bags stuffed with what I felt I needed to live until October in the bush.  Minus the gear of course.  That was provided.  We will get into that later.

I knew the stories from this job would be important to tell someday, and I had the time to write down the significant biological observations each day before I went to sleep.  So each night in my tent I put them into a hard bound journal.  For aded comfort, I stacked my gear into a spare dry bag ( Mr Bill’s of course) and formed a couch for reading and writing in my tent in an effort to make the entries habit.

I was able to do and see things many others could not, so it seemed reasonable to put some energy towards sharing them at some point.   Now twenty years later, having a supervisory office job in fisheries habitat restoration, these daily entries have become more meaningful.  As I go through them I can say with confidence, that they are accurate and detailed other than the mundane eating, sleeping. and conversing with staff and colleagues.

I operated this remote base camp from April through the first part of October.  It was was a blast, but did have a survival element.  I ensured several management and research projects were safely conducted out of this camp on a remote, less traveled  glacial river, draining the volcanos of the Egegik Watershed on the Alaska Peninsula.

The Egegik system is a huge sockeye producer; 10 million plus in some years.  Lake Bachareof is the unexplored wilderness equivalent of Baikal.  The King Salmon River empties into Egegik Bay from the north.  The camp location was on a clear, moderately sized tributary of this lesser known king and chum salmon producing river.  This river was glacial.  Turbid all the time. We were about 80 miles from tidewater tucked on a floodplain terrace behind a bluff.  Another small clear water tributary entered a mile or so downstream. 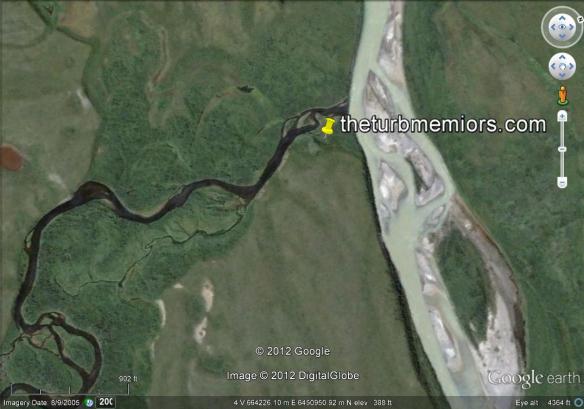 Located 80 miles from the tidewater our salmon were water marked on arrival.  Chrome individuals of all species were recorded in the weir count and sampled on sport tackle.  Most Chum were fresh, spunky and marked with distinctive purplish striations.  Kings were rosy pink, some chrome, with a few true lobsters on arrival.  All were in herds and packs as they arrived in June and early July.  Pinks were present and stuck together mostly spawning lower in the system; more abundant in even years.  Coho arrived with the first fall rains.  Mostly chromers at first; then big pulses of dark hook nosed monsters as the run progressed.  The rain and rise in water level brought them in.

As an added plus thousands of plump chrome, and gitty dolly varden char flooded the system with the main push of the salmon.   As the season progressed (into August) colored male char became common in the catch.  Arctic Grayling were present and abundant at the weir during a brief, but pronounced spawning run in early spring, and were well distributed through the system during the rest of the season.

The star of the show was a population of rainbow trout that relied on this 15-mile long tributary as a stronghold in the Egegik watershed.  Pronounced immigration into the creek occurred during the spawning period in spring and again as salmon spawning was at its peak.

Many of the journal entries will feature these mighty leopard rainbows to capture the attention of all readers.  They were the star show for sure.  The reason was the research to document the ecology, population size and, behavior of this amazing species on a remote wilderness stream.

The goal of our studies at this remote stream on the National Wildlife Refuge System were too:

1. Enumerate all species traveling through the weir site and compare those counts to more traditional aerial spawning counts for the system.

3. Complete data collection for a study to identify the sampling bias associated with the use of hook and line sampling techniques on a known population of rainbow trout.

A brief introduction to the weir is needed.  Some entries will include more detail about the weir, its operation, maintenance, construction etc.

The weir was 120 feet in length.  Placed diagonally across the tail of a long run in cobble substrate, immediately upstream of the confluence with a large glacial river.  It was constructed of ten foot long panels made of aluminum electrical conduit “pickets” strung on braided steel cable with white pvc spacers between.  The spacing was 1/2″ to catch all fish 10-12″ and larger.  A trap box was wired into the panels at the the upstream and downstream wedges created by the weir and the bank line.   This is where we passed fish upstream and downstream.

All the weir panels were installed slanted upstream to increase performance in a range of flows, to pass debris, and force fish movement through the trap boxes.  The panels were laid against braided steel cable strung from bank to bank. This cable was supported with T post, used as struts and pushed into the stream bed.  At standing height the weir was slightly above my waist level with an average adult being able to wade across on the downstream side of the weir. 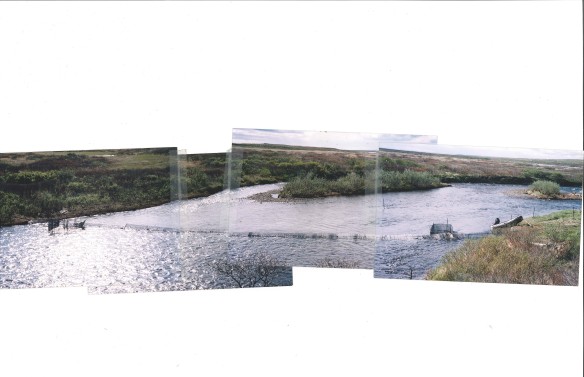 What a day to start and adventure in Alaska!  I arrived a day before and moved into the bunkhouse.  Today was my first day to come work for the USFWS King Salmon Fisheries Resources Office in King Salmon, Alaska. I met my supervisors, and the crew I would be working with this field season.  We had a long talk about guns and bears.  Took a test.  I got a 96.4%.  Not bad for the first day.  After lunch we drove to the local gun range and shot at somer bear targets.  We took shots with a short-barrel 12-gauge shotgun; a Moss-berg and Remington 870 both pumps.  We also busted out the H+H .375 mag.  The whole crew took shots a 7 and 15 yards and at a bear simulated to be running at you on a human powered sled contraption.  To protect yourself and others with the gun in the field you had to get 2 out of 3 in the kill zone on each target.  Pressure was on!

Remember this was simulated under bear attack conditions

Icebergs are rolling up and down the river with each tide cycle.  Not true icebergs but huge pieces of ice nonetheless.  King Salmon is a pretty cool place.

Finished trainings.  Blood Pathogens, First Aid and CPR, Helicopter and bush plane safety,  gumby suit,  working with bears, and half day of operations Q and A.  Friday was gear day when we made our initial look at the camp gear we needed to prepare.  Got my first look at the yellow North Face expedition tent provided as housing, secured a freshly laundered North Face sleeping bag, and two thermarest sleeping pads.

On Saturday I hitched a ride to Rapids Camp on the Naknek River to swing an few custom sculpins and leaches for huge rainbow.  Ice levels made me feel early to the party that year, but hey rides were hard to come by and I was in AK after all.

The highlights I remember are:

My supervisor wanted all the stakes removed from the brand new tents that came in over the winter.  What !!! Hen then asked that we replace then with 12 inch galvanized spikes.  He wanted 10 per tent.  I took 15 as crew leader.

They (the leadership) told us stories of the crew reports finding a fellow cadets tent two miles downriver, glacial washed and partially wind dried.   With all his gear inside.  Didn’t get the tent stake memo bro?!?!? 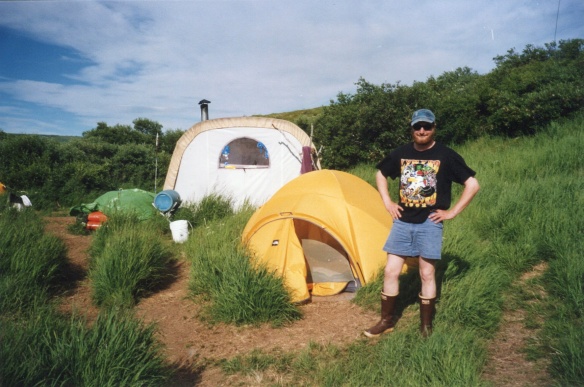 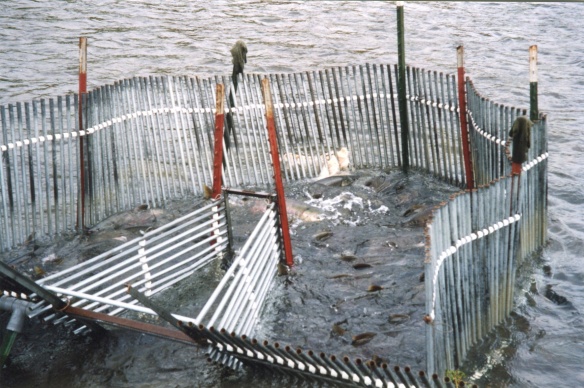 The food was simple.

As a USFWS all field employee you were paid per diem on top on your hourly wage, plus had all food etc provide in the base camps and on remote survey assignments.  All base camps were re-stocked with fresh items, mail and needed supplies every two weeks or so weather dependent.

All food was ordered in bulk stored in at the main office or bought fresh at the local store.  Anything in the food cash was available for camp and survey crew needs.  The cash was the equivalent to your dream “totally” stocked campground store.

Beer was on your own dime.

I felt it was my duty as a self proclaimed fishing bum who was addicted to the tug to ask the question “Can I bring my fishing equipment?”  That happened 5 minutes into the job offer call.  The response was “As a measure of sanity and safety, Yes we will allow that”.

After some discussion, I found out that that my potential supervisors next question was going to be about my skills with the art of angling.

As it turns out……

In the end I would play a major role in the execution of a study to determine the bias of hook and line sampling on a population of rainbow trout.  This included research grade angling (fly, lure, and bait) under a strict study design  to collect data and tag fish for population enumeration and classification.

Serving as the river keeper for over three years (seasons) I understood the salmonid ecosystem.  I used and showed the power of this knowledge to many of the guests and volunteers that moved through the camps.

Read the stories below and see fishing through the eyes of the ecosystem.  There was no fly shops or blogs to follow in order to find out what the current hotness it.  Only your own signature ties and the pre purchased terminal equipment and hotness.  Knowledge of the system cannot be purchased.

Who is your daddy? 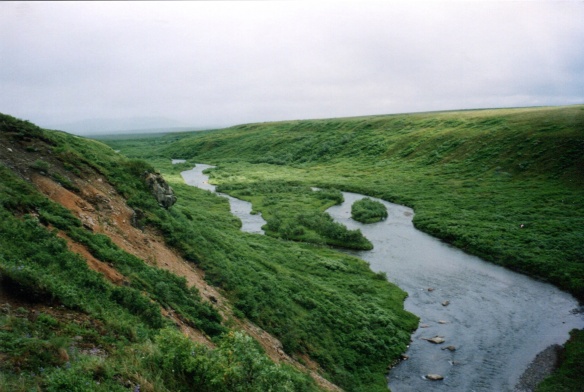