My five-year old son has insisted on a catch and cook fishing/camping trip for a while.  This year we have lined up a few such missions at the Turb Memiors.  The first was an 80 mile trek to a productive reservoir with a healthy population of well fed plumpkins.  Our journey lead us through the agricultural valleys and gentle mountains of Crook County, Oregon.  Green in spring under the powerful sun.

When we arrived oniste I quickly noticed that parking spaces were in high demand on and off the water.  What a shock!  It’s packed.   I pulled over to assess the scene in a flat area off the road to the federally managed campground–CLOSED.  Sweet!  People were camped in the parking area and in choice pull outs.  I could see that the surface of the reservoir was dotted with sportsman on their catch and cook missions.  I thought leaving on Friday morning would be just fine.  I was out done once again in quest of “getting there first”.

I needed to unload gear and establish an outpost.  After a 20 minute reconnaissance of the hill slope and adjacent campground.  I decided to use my five-year old son as a pack mule and we huffed our things a few hundred yards to a campsite in the closed campground.  I could not camp near the busy boat ramp all weekend with five-year old.   The dust alone would have killed us.

In the shade of our outpost we regrouped and planned our mission.  With the boat launched we rigged the rods and tried our luck.  It was tough the first few hours.  “Green Goo” water clarity prevented traditional searching techniques of the panther martin or mepps spinners.  The GOO quickly forced us to try other means.  Drifting store-bought night crawlers should work.  After a quick re-rigging we realized the Green GOO had got us again.

More skilled patrons anchored in clear sight, were killing them on chronomids fished under an indicator.  Slow, low and deadly.  Some folks easily limited out in the time I spent getting GOOed.  Finally we resorted to the bobber, worm and a small weight.  Tried and true on one rod, and a woolly bugger on the intermediate sink camo lake line on another.  As plumpkins fell to delicately placed chronomids across the small shallow inlet, we gave it our best and got nothing but two aggressive takes on the bobber.  Slow reactions missed those fish who got a free worm.

I figured I should throw a grip and grin shot in soon to keep your interest. 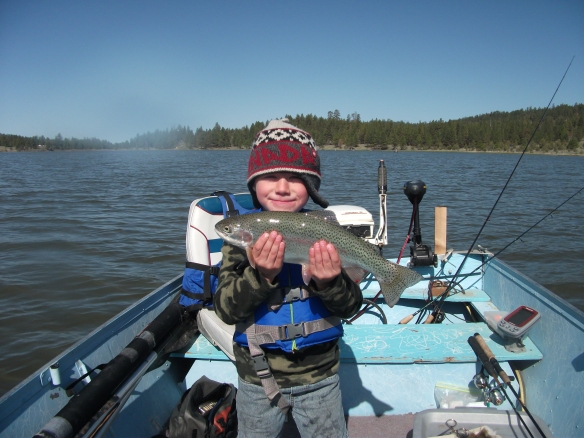 That evening we regrouped and decided to position ourselves for the evening hatch.  Using the anchor we covered a broad bay off the main channel that seemed to be a popular spot during the afternoon.  Fish began to dimple the surface regularly as the sun dropped lower.   I was using a small ribbed chronomid pattern stripped slowly back to my position.  As it sank into the depths it seemed to evade the GOO.  I felt the take and set the hook on one.  The battle was short and the broad shouldered hatchery born holdover snapped my line, and then broke the surface in reaction to the battle.  WOW!

I proceeded to miss another strike and watch fish rise all around me until dark.

No shortage of fish.

Around the fire that night we refined our plan of attack to get what we came for! And that was a fish fry.  Back at it the next morning we anchored in the broad bay as the wind caused us to fish more deliberate and refined presentations a from static boat to effectively cover the water.  We used a lightly weighted worm with precision the weed patches, and slow stripped a #10 olive hares ear.  We hooked up an hour or so into our sit and landed the 14 inch plumpkin.  Likely last years stocker at 6-8 inches.  Now one year later it was 14″ of plump sportiness.  Bonked and photographed we hung the trophy off the side of the boat.   A half hour later, at another stop in our grid pattern across the bay we hooked up on a 2 year old slob.  It was 18″ of plumpkin power.  We photographed and released this specimen of sporting pleasure.  After a few more hook and snap off on my fly rod we decided to move on and start the cook part of this mission.  The fly donation ceremony was over.

The “drag out” was documented.  Uphill! 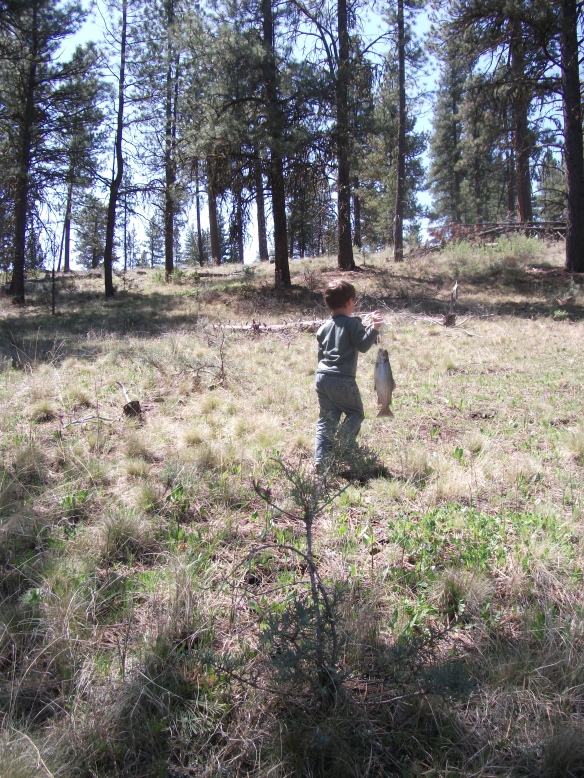 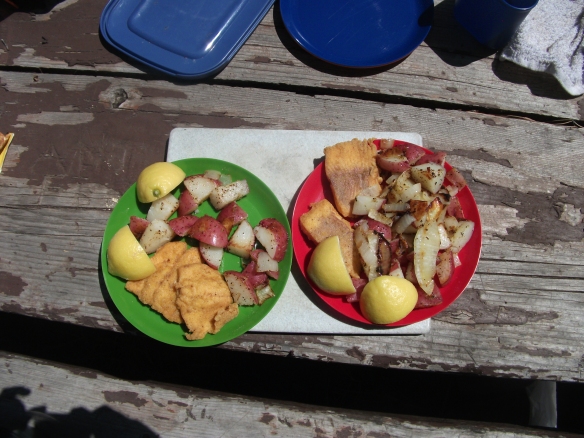